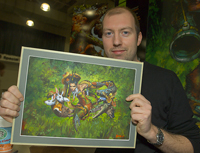 Born in 1972, spending former years in Englands Westcountry (specifically North Dorset,) I was drawing and painting from an early age. After attending a visual media course in Bournemouth (and having met some of the finest people who continue to keep me honest to this day) I considered myself adept enough with storyboarding to get a job illustrating for the 'Galaxy's Greatest Comic' (2000AD for the uninitiated.) A year later, during which much time was spent knocking out spec scripts and trying to evade my dole officer, I finally landed that first job, a story called 'Harmony' for the 'Judge Dredd Megazine'. The commissions kept coming, over the next few years I illustrated characters such as Holocaust 12, Slaine and Judge Dredd, culminating in two fully painted 48 page graphic novels. The first was a 'Judge Dredd Batman' crossover called 'Die Laughing' published in 1998, the follow-up an Elseworlds book for DC Comics, 'Batman Demon' in 1999. Other work in this period included props and promotional pieces for the excellent Channel 4 TV series 'Spaced' and a 25 x 50 foot canvas backdrop for the Prodigy (completed in spray-paint with fellow 2000AD artist and friend Jason Brashill.)

In 2000 I began working as a concept artist for Video games, first with Virgin studios in London, then 3 years later for Artificial Mind and Movement (A2M) in Montreal. During this time I began freelancing for Wizards of the Coast painting Magic cards, a privilege that I continue to enjoy to this day. I am also currently working on a creator owned graphic novel with 2000AD and Wildstorm regular Robbie Morrison, I'll be posting updates on this project as and when we get a chance to get some content done.

I live in Montreal with my lovely partner Annabel and my equally lovely two daughters Rebecca and Jaimie.