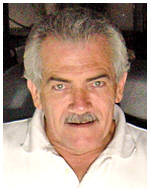 Born in 1946 in New London, Connecticut, Ken Kelly practically came into our world with a pencil in his hand. He started drawing at the fragile age of two and has not stopped since. It is said that children learn to express themselves through art. Well then, Ken must have been quite a revealing youngster, for nothing in the house was safe from his artistic expressions, from the smallest piece of paper that he would squeeze a tiny doodle on, to the very large drawing board known as the living room wall!

In the fourth grade, at the age of nine, Ken was introduced to art teacher Mrs. Valerious (hmm… that name is strangely close to Valeria – Conan’s pirate companion in Red Nails). This was the beginning of a relationship that would last for the next nine years. Mrs. Valerious gave Ken the direction he needed. She showed Ken how to develop and put to use his natural talent. She taught him the principles of art.

Unlike most art teachers that would push their students to go on to art school, Mrs. Valerious had quite the opposite approach. She convinced Ken’s parents not to put him through art school after high school. She claimed that it would ruin his natural and unique style.

That was just fine with Ken, as he had always dreamed of joining the Marines. After high school, that’s exactly what he did. For the next four years he found himself touring around the world serving both at Guantanamo Bay and Vietnam. During his service to his country he even got to use his art skills. While stationed in Cuba, he did all the illustrations for the U.S. magazine, “The Gitmo Gazette”. 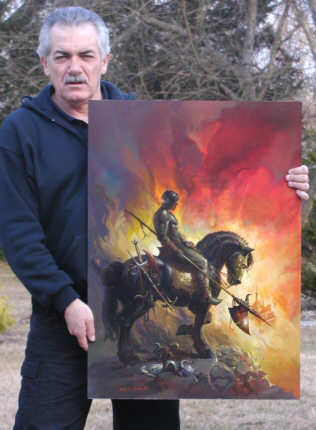 He completed his four-year term in 1968 and returned home to New York. During the next year, Ken’s life would veer further into the realms of fantasy art. In 1968, he decided to go to the studio of Frank Frazetta and show him some of his own drawings. Frazetta liked what he saw and encouraged Ken to pursue a career in commercial art. At the same time, he also invited Ken to study under him. Ken eagerly accepted Frank’s offer.

Under the guidance of Frazetta, Ken was able to fine-tune his skill even further. Frazetta stressed how important it was to put feeling into creating a painting and to let the action on the canvas come from the imagination. Ken took those words to heart and has lived by them ever since.

Later that same year, Ken received his first professional assignment. Before he turned the painting in, he took it to Frazetta to get his approval. Well, Frazetta did not think that the woman in the painting had a terrified enough expression on her face, so he painted over her old face, with a new one of his own, which he felt worked better. Now it was ready to be turned in. That painting was done for Warren’s Vampirella Magazine and is titled, “The Lurking Terror”.

For the rest of that year, Ken worked for Warren and Skywald magazine. Then in 1969, he entered the book cover field and has since worked for just about every major publishing house. Ken has done work for some of the best selling authors in the field, including an outstanding series for Robert E. Howard, and the complete series of Robert Adam’s famous Horseclan (цикл) novels.

Outside the bookcover field, Ken has worked for nearly all of the large toy manufacturers. He has also done many album covers, including two paintings for KISS, for which he was rewarded with gold albums.

Over the years, Ken’s artwork has continued to have the unique ability to evoke the imagination to travel to faraway places and primal battlefields. You will see that same imaginative ability in both his pen and ink drawings and his full color paintings. His work quite literally explodes with energy and throbs with life. His paintings are done exclusively in oil and are relatively large in size. Most of the paintings average 30”X40”, and many are much larger. In fact, “Kingdom of the Knights” measures a fantastic 40”X60”! – Paraphrased from Ken Kelly’s Book “The Art of Ken Kelly” by Michael J. Friedlander – July, 1990