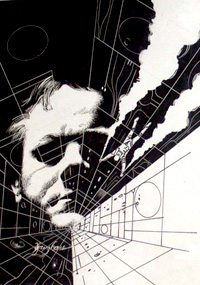 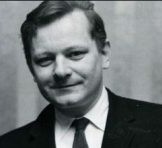 Jack Gaughan (September 24, 1930 — July 21, 1985) was an American science fiction artist and illustrator who won the Hugo Award several times. Working primarily with Donald A. Wollheim at Ace Books and later DAW Books, and also Galaxy Magazine during the late 1960s, his simple linear style brought to life unforgettable images of such classics as Andre Norton's Witch World Novels and Edward Elmer Smith's Lensmen and Skylark novels (for which he did two related sets of Pyramid Books covers). His broad visual vocabulary enabled him to render the objects, spaceships and scenes in whatever was presented to him as they were described in the books and stories he illustrated. That was especially an accomplishment as many of these authors drew on their knowledge of very esoteric subjects for their imagery. This ability made him very popular among people with an engineering background.

During most of Ejler Jakobsson's tenure at Galaxy Magazine from 1969 to 1974 he did all the illustration and much of the design that went on in the magazine. In addition, many of the books he did for Ace featured frontpieces, hand-lettered titled pages or maps at the front with Gaughan's distinctive calligraphy. An example would be Alan Garner's The Weirdstone of Brisingamen. L. Sprague de Camp's 1967 anthology, The Fantastic Swordsmen included a Gaughan map before each of the stories in it. Most notoriously, he did the covers and hand-lettered title pages for the Ace Books' edition of J. R. R. Tolkien's The Lord of the Rings.

As well as his professional work, he was a frequent contributor to SF fan magazines. Locus ran a column by him for a while, and in his heyday he was often nominated for Hugo Awards for both professional artist and best fan artist simultaneously.