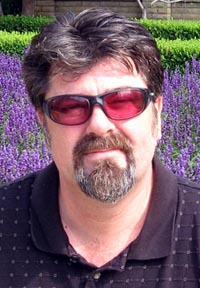 Den Beauvais is one of the most prolific and versatile artists in the field of Fantasy/Science Fiction today or in any venue he passionately explores. He has won numerous awards for his cover art for books, magazines, game boxes , comics books and a host of other mediums. His artwork is widely sought after by collectors and has graced classic book covers by such renowned authors as Isaac Asimov, Margaret Weis, Piers Anthony and Gordon R. Dickson.

Den has been nominated twice by his peers for the Chesley Award as the Best Paperback/Hardcover artist of the year, and he received the prestigious Eagle award for Favorite Comic Book Cover of the year for Aliens #1. His art had an essential role in launching Dark Horse comics and he has illustrated many covers for Dark Horse works, such as Predator, Star Wars, Starship Troopers, Time Cop, Ghost and more. Den also initiated the Universal Monsters graphic novel adaptation series with Dark Horse Comics, starting with his color rendition of Universal’s classic 1931 Boris Karloff Frankenstein black & white movie.

Den’s cover illustrations for PC games drew Cinematrix Studios to his door inviting him to produce concept illustrations as well as the cover packaging artwork for their game “The Revenant.” This eventually opened a new world for Den, the world of 3D modeling, and character game modeling . His fame spread and companies like Sony Online, AOL and Disney courted him to take on important projects. Even the Canadian mint appreciated the extraordinary quality of his work and engaged him to design a historical sea serpent one dollar coin. Den’s imagination knows no borders. He has done wildlife artwork, costume designs, sculptures, woodwork, sword forging and two music albums of his own. Today, he is a highly sought after artist in the field of fantasy and Science Fiction art. Den has earned a nickname that sums up his abilities very well:

Den Beauvais, a.k.a. “The Imaginator.”