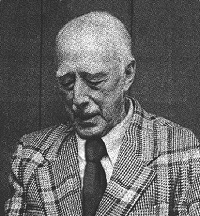 Canadian illustrator who studied art at Toronto Technical School and the School of the Museum of Fine Arts, Boston. He began his professional career in 1925 in New York, painting covers for books and for various magazines, including Adventure and The Argosy. He entered sf publishing with a cover painting for Astounding Science-Fiction in 1939, and painted 58 covers and drew interior Illustrations for 60 issues of that magazine 1939-1956. He and William Timmins dominated the covers of Astounding during the 1940s (Rogers did all of them April 1940-August 1942), a period when his comparatively muted style gave the magazine something of the dignity John W Campbell Jr craved: more serious (and even solemn) than those of many of his colleagues, Rogers's covers epitomized the technological aspirations of Astounding in its more high-minded mode. His cover painting for «Fury» (May 1947) by Lawrence O'Donnell (Henry Kuttner and C L Moore) is considered his premier painting, and is one of the best covers ever put on an sf magazine. Rogers also did jacket paintings for several hardcover books, including those for three Robert A Heinlein novels from Shasta. He left sf during the 1950s to become one of Canada's foremost portrait painters.